In Chicago we introduced new versions of our D-series benchtop scanners with improved scanning speeds, accuracy and interior size. We also launched two new lab scanner models: the D2000 and D1000 that feature multi-line scan technology. Our new proprietary multi-line technology has been shown in trials to increase scanning speeds by upwards of 30%.

The new versions of the D-series benchtop scanner are the D750 and D850, which are major upgrades of the former D700 and D800 scanner models. The two, along with the presently available D900L, now feature a new technology platform combined with a larger interior space and blue LED for reduced scan noise.

In addition, the D750, D850, and D900L also include a three-year subscription to 3Shape LABcare™. The three-year LABcare™ bundle features free yearly software updates, product training, and service. The included subscription offer is valid until September 30, 2015.

The D-series also contains the D500 desktop scanner and includes a cost-effective option to extend the LABcare™ package to three years.

In Chicago, we introduced two new D-series lab scanners, the D2000, and D1000. The two scanners are equipped with 4 x 5.0 MP cameras and high-quality mechanics to improve scanning accuracy and the aforementioned multi-line technology for increased scanning speeds.

The D2000 desktop lab scanner additionally includes several other breakthroughs like, “All-in-One” scanning and a large interior with room for two models.

All-in-One scanning and the D2000s large interior space enable dental technicians to capture both the upper and lower models, inserted dies, and occlusion information in a single scan. The technology also enables the D2000 scanner to ”see” around dies in the model so that there is no need in most cases to remove dies during scanning. *

A process that can eliminate four out of the five workflow steps used to scan e.g., a 3-unit bridge. And reduce workflow steps to result in a handling time-savings of up to 40% for dental labs. 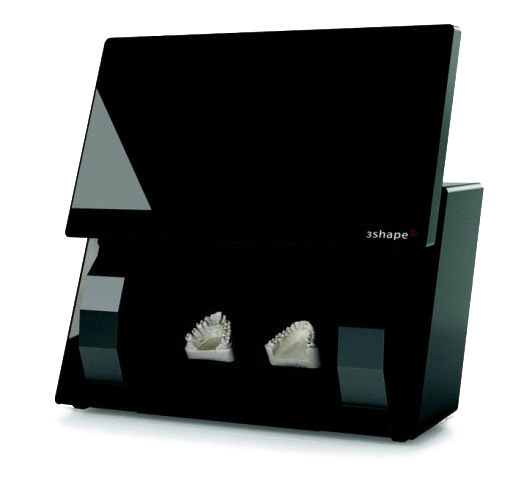 Documented accuracy in all 3Shape scanners

* An additional die scan may be required for cases with exceedingly limited interproximal space between dies and neighboring teeth. All dies must be trimmed and models section.

The new Dental System 2015 was also introduced in Chicago. It has added several new and exciting features plus 3rd party integrations and libraries. Read more.