“My 3Shape TRIOS is much more than an intraoral scanner”

Up until now, CAD/CAM has primarily been used for the design and production of dentition. Should we be doing more?

Leading prosthodontist, Dr. Jonathan L. Ferencz, believes that the digital data generated by intraoral scanners can be applied in many more ways. As a 3Shape TRIOS intraoral scanner user, he says that his TRIOS is much more than just a digital impression solution.

In this interview, Dr. Ferencz explains how to start thinking differently about your intraoral scanner and why you should want for example, a scan of every patient and a TRIOS in every operatory.

“You could use it to communicate a patient’s existing condition in real-time. Something as simple as caries, or a crack, or a crown and all the way up to sophisticated esthetics.”

When you say your 3Shape TRIOS is not just an intraoral scanner, what do you mean?

In the beginning, we only thought of digital dentistry as being CAD/CAM. And CAD/CAM applications usually involved some sort of reconstruction of the dentition. This could be either existing teeth that were malformed, un-esthetic, or missing teeth that needed to be replaced with a fixed or removable restoration.

For the last 10 years, this is how doctors and the industry thought about CAD/CAM. But what 3Shape and I have come to realize is that there is so much more potential with scanning technology as a communications tool, a demonstration tool… applications that have nothing to do with manufacturing.

So what would you advise dentists to use digital dental impressions for?

I was doing some continuing education at the University of Alberta in Edmonton and the chairman of the department and I talked about this. He said to me, “boy, do I wish I had a scan of my son-in-law who is a professional hockey player.”

He had a very nasty injury that required extensive oral surgery. He had a broken maxilla and they had to re-position it and wire him closed.

He added, “if I could have had an occlusal record of him, it would have been so incredibly valuable as the oral surgeon was trying to wire him into occlusion with mobile segments.” It hit home.

Does the intraoral scan become part of your patient’s record?

I don’t think we can even imagine the potential of having scan data as a baseline on every patient. Anytime that I can tell a patient that they have some type of condition that I need to either monitor, or they have no condition, and I just want to create a baseline, just in case one develops at a later point, let’s have a scan in your file. If you damage a tooth, we can compare it to your baseline.

For example, your patient is in a bicycle accident and calls you on a Sunday. “I fell off my bike and fractured my two front teeth.”

Do you want to try and recreate the anatomy of a patient’s two front-teeth? Instead, we just open a scan that we recorded five years earlier and have the exact form and color of his teeth before the accident. In the past, we would ask for a picture, something like their high-school graduation photo. It’s worthless.

Plus, with an intraoral scan there’s no radiation, there’s no exposure, it’s just high-speed video. There’s no downside and there are no costs.

Outside of the cost aspect, do you see more benefits of working with dental impressions? In terms of more efficient documentation, maybe?

There are tremendous opportunities. I believe so strongly in it that I think scanning technology should be used for documentation and charting. For example, when communicating with the specialist, “have a look at this patient that’s in my chair, what do you think I should do?” I think we could use it to communicate a patient’s existing condition in real-time.

Something as simple as caries, or a crack, or a crown and all the way up to sophisticated esthetics.

3Shape dental monitoring tool lets doctors monitor, visualize and measure changes to their patients’ dental situation over time so patients can see with their own eyes where the problem is.

What is it that patients can now see that they couldn’t see before?

Just think about it, it’s kind of magical. I can take a scan on-screen, and turn it around, upside down, show it from the occlusal or from the lingual, from the back, you name it.

You can show a patient why a certain tooth feels the way it does. It has a fracture or it’s not in occlusion, or it’s in hyper-occlusion. You could never demonstrate those things before. Basically, I see professionals using TRIOS on not just any patient, but on every patient. I see the scanning of each patient becoming a definite part of our routine.

Does that mean you have multiple intraoral scanners in your practice?

What I’ve noticed is that in our digital age, with my patient population that ranges from millennials to octogenarians, everyone can understand what I am trying to show them with an intraoral scan. Everyone! And when they see their scan, they almost always say the same thing, “doc, that is the most amazing technology that I have ever seen.”

Patients that would once say, “I would have accepted the treatment because I trust you,” now accept the proposed treatment because it’s simply a no brainer. This is what a dental scan and compelling demonstration can do.” 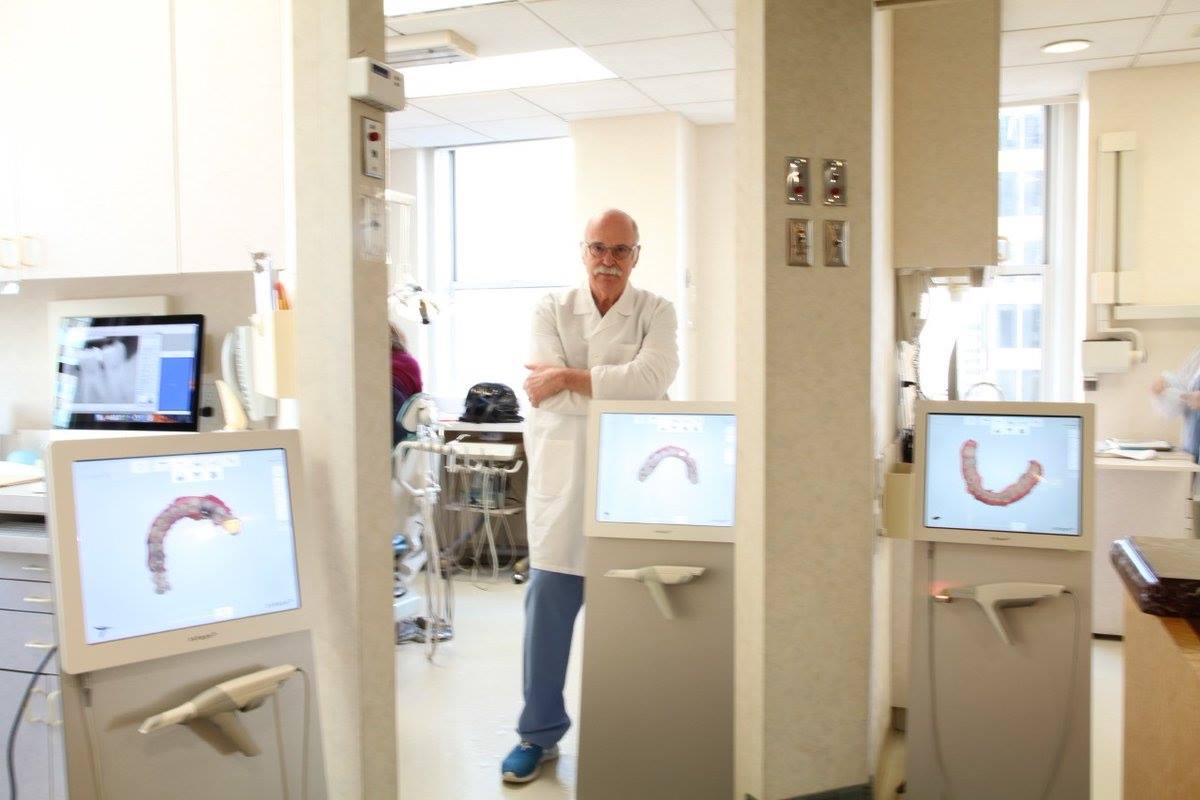 Here’s the deal with operatories. I use on occasion, an electrical surgical unit for retraction. I don’t even use it every day. But I have one in every operatory and it’s always set up. So, if I wanted to, I would just flip the switch and it’s on.

Now if I had to go to another room, or move the patient to that room, or disrupt somebody in that room that has the unit and bring it into my room to set it up, I would not use it. So even though I use the retraction unit maybe five minutes a day, there are still four of them, one in each of our operatories in our practice. The same thing is true for an intraoral scanner.

When I look at even a hygiene patient, the best way to show them anything, is with a scan. But if the scanner is in use in another operatory, maybe I won’t do it. That’s why you need more than one.

I have found that by taking a scan of every patient at every consultation visit, and showing them what their need is, as well as what the proposed final-result would be, it significantly increases patient acceptance. If you have one patient agreeing to a large case because you showed them a scan, you can nearly pay for an additional scanner.

For my practice, having a scanner in every operatory and scanning every patient is becoming the new norm.

Best-in-class scan technology
TRIOS intraoral scanners come in three different models to support you in every step of your digital journey.
Explore

Want to deep-dive into our portfolio of intraoral scanners?

How to price and find the best intraoral scanner

The complete introduction to intraoral scanning

Digital vs. analog impression taking — which one is the safest?